Skip to content
Previous Next
Remembrance in Venray, the Netherlands 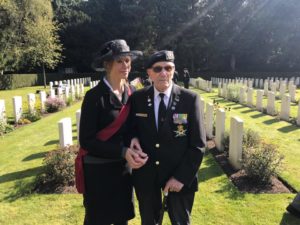 At the Commonwealth War Graves Commission cemetery in Venray, the Netherlands, 663 soldiers of the second world war are buried. Each year, in September, the people of Venray organise a remembrance ceremony to which veterans are invited. This year, Emma was invited to sing Amazing Grace with piper Kenny Brouwers. The local children laid red roses on every grave in the cemetery. Following the service, the veterans gave the children chocolate, just as they had shared their rations with the people of the Netherlands when the country was liberated in 1945.