Skip to content
Previous Next
The Story of John Sleep 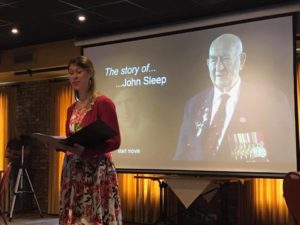 On 17th September, Emma was invited to sing from the presentation of a film about the life of Corporal John Sleep. John Sleep was a paratrooper during the second world war. He arrived at all his missions by sea. First he fought in Africa and then in Italy. On D-Day he landed on Sword Beach and travelled north towards the Netherlands. He was eventually injured when a tank fired at him. Last year, during the commemorations of the second world war, John was asked to speak about his time in the army. This was made into a short film which was presented on 17th September. Emma sang a concert following the presentation.