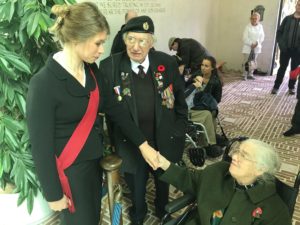 With Fred Harris and Karin Churchill.

On 12th September, Emma sang at a wreath-laying ceremony at the Netherlands American Cemetery in Margraten. 8,301 American soldiers rest in the cemetery; they perished fighting to liberate the Netherlands in the final year of the Second World War. Stichting Nederland-Amerika invited twenty veterans from America, Canada, and the United Kingdom for remembrance ceremonies and celebrations. There were some familiar faces present from Normandy including Fred Harris, Len Fox, Len Mann, Reginald Charles, and Frank and Karin Churchill. Also present was a US veteran returning to the Netherlands for the first time since the fighting in 1944. Emma sang “Abide with Me” and “How Great Thou Art.” The ceremony was broadcast on Omroep Brabant.