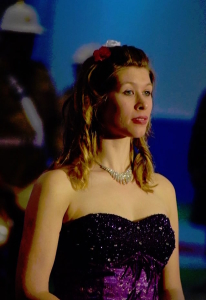 2015 has been a fulfilling and enjoyable year for Emma. In spring she began a collaboration with the Band of Liberation that has taken her to Normandy and to various military tattoos. For 2016 there are plans to return to Normandy and to participate in the Belfast Tattoo.

Emma made her Dutch television debut in Nederland Zingt last December, singing a Dutch translation of O Come, O Come Emmanuel. This was broadcast several times and appeared in the highlights of the programme’s annual review.

Emma also had various solo concerts and oratoria, including singing in Liszt’s beautiful and intimate work Via Crucis with pianist Willem Brons.

2015 was a special year in Emma’s hometown, Leiden, since it was the celebration of 700 years of the Hooglandse Kerk. Emma performed at the Kerk in het Licht (“Church in the Light”) sound and lights show. The newly-restored Father Willis organ arrived in the church, and the official inauguration is anticipated in spring 2016.

A new and exciting experience for Emma was appearing in her first pantomime since her school days. Emma played the role of Beauty in Beauty and the Beast at the Koninklijke Schouwberg in The Hague.

Emma’s work for De Buren continued as she recorded City Books and performed in Brussels. Meanwhile, she received several composition commissions, some of which are ongoing in 2016.

But first, Emma is taking a month off to travel in China during the spring.