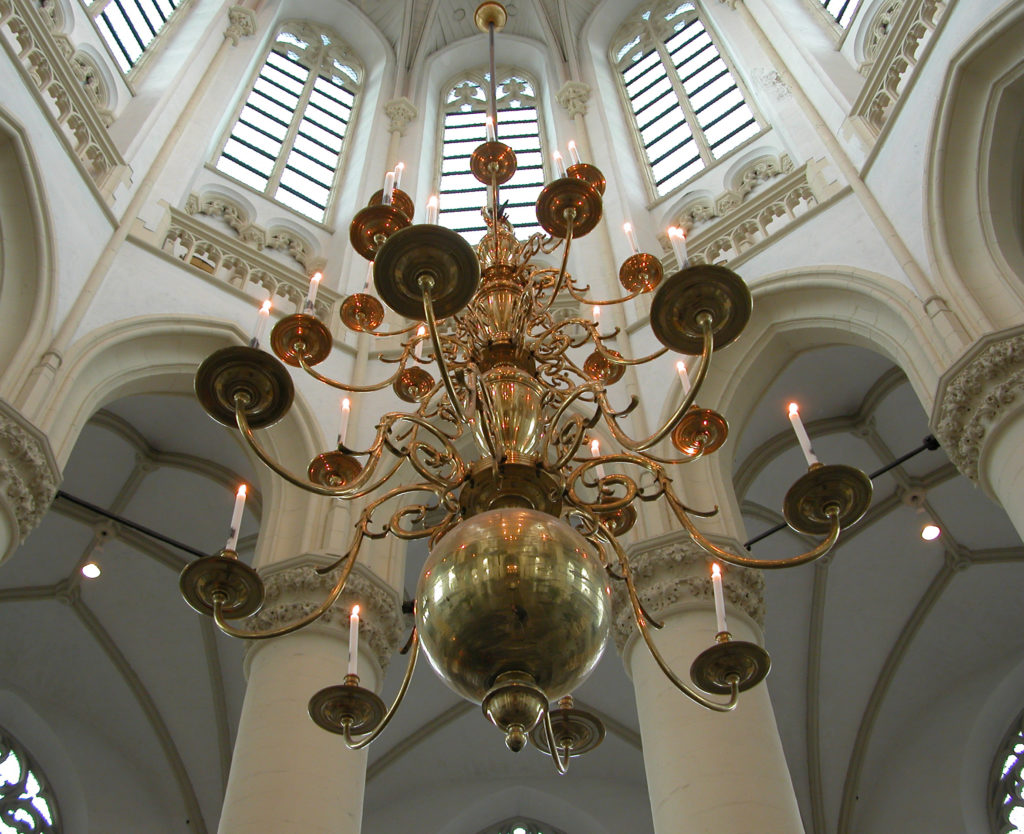 Please join us on Good Friday at 10:30 for a live streaming of a Mini-Mattheüs with meditation from the Hooglandse Kerk. Four Leiden singers, an organist, a minister, and a technician have teamed up to present an abridged version of Bach’s St Matthew Passion. The streaming link can be found on www.hooglandsekerk.com and it will also be broadcast on Dutch television, on Unity TV.

The initiative came from verger Ronald Hartsuiker. He asked his partner, mezzo-soprano Emma Brown, if she thought it would be possible to perform the St Matthew Passion within the new social distancing guidelines. The work is originally for two choirs, a children’s chorus, six soloists, and a small orchestra. This far exceeds the current guidelines that only seven people should attend Leiden’s protestant chuches. So Ronald challenged Emma to work out a way of performing the Mattheüs within the maatregelen: a very limited number people in the church.

When Emma moved to Leiden in 2007, she was suprised by the enthusiasm of the Dutch for the St. Matthew Passion. “It’s performed in England, but it’s not given the same reverence as it is here. I understood why Ronald wanted to continue the tradition this year, even if we have to make changes and adapt because of the new guidelines.”

The St Matthew Passion is Bach’s setting of the gospel of St Matthew, chapters 26 and 27, together with chorals and arias by various authors. The libretto was compiled by Picander, the pen-name of Christian Friedrich Henrici. The words of the gospel are mostly sung by a tenor (the evangelist) and a bass (Jesus) in recitative: a style of music with minimum accompaniment to suggest speech. The gospel is occasionally interupted by an aria, chorus, or chorale which reflects on the gospel.

In our mini-version, we present a selection of the chorales, choruses and arias. These include “O Haupt voll Blut und Wunden,” “Erbarme dich,” “Mache dich, mein Herze, rein,” and the closing chorus. In between the fourteen extracts, the gospel texts will be read by the minister of the Leidse Binnenstadsgemeente, Margreet Klokke. Our other verger and in-house technical genius, Peter Breedijk, is arranging the live-streaming. The singers, all from Leiden, are soprano Saskia Brons, mezzo-soprano Emma Brown, tenor Jacob Trudy, and bass Eric Brons. Saskia and Eric Brons both sing in the Leidse Cantorij, the choir of the Hooglandse Kerk, and co-ordinated the purchasing and restoring of the magnificent Father Willis organ. This organ will be played by Willke Smits, organist of the Hooglandse Kerk.

Ronald Hartsuiker says: “As the guidelines have become stricter, we have naturally allowed fewer people into the church. It is heartening to see that people are watching the live stream each Sunday. Before I worked for the church, I worked in healthcare and I am aware of the loneliness caused by isolation and boredom. I am glad we are able to present something from us who work in the church for both the church community and the wider community in Leiden.”