Skip to content
Previous Next
Remembrance Ceremony for the victims of the Battle of Arras, Arras, France 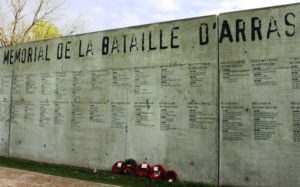 The Memorial Wall at the Wellington Tunnels

During the First World War, the allied forces sometimes sheltered in tunnels as well as trenches. In the French town of Arras, the New Zealand Tunneling Companies dug a large network of tunnels which connected to the town’s existing Roman and Medieval tunnels. These formed a base for over twenty thousand Allied soldiers, including a hospital with seven hundred beds and several operating theatres. There was running water and electricity. The New Zealanders named the tunnels ‘Wellington’ after their capital.

On 9th April, 1917, at 05:30 am UK time, the Battle of Arras began. Soldiers ran out of the tunnels into No Man’s Land. In the thirty-seven days that followed, nearly 300,000 soldiers and officers were killed or wounded.

On 9th April, 2018, at 06:30 am local time, there will be a remembrance ceremony at the Wellington Tunnels to mark the anniversary of the Battle of Arras. Emma will sing Abide with Me, Danny Boy, and Amazing Grace. Music will also be provided by the Orchestre d’Harmonie d’Arras, piper Anja Pepplinkhuizen, and ‘cellist Fabrice Bihan in what promises to be a moving and fitting ceremony. Britain and the Commonwealth will be represented by attachés and military personnel, and the Mayor of Arras will also attend and lay a wreath.