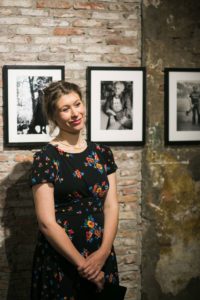 I’ve really enjoyed my work in 2017: especially the focus on remembrance and work with veterans. A personal highlight for me was singing for the centenary of the Battle of Passchendaele. The week began with the ninetieth anniversary of the Menin Gate in Ypres, Belgium. The Commonwealth War Graves Commission arranged a ceremony to mark the occasion and to commemorate the soldiers listed on the monument. Later in the week, I sang at 05:20 in the morning to mark one hundred years to the minute of the start of the battle.

My work with the Royal British Legion, both in the UK and continental Europe, included ceremonies in Normandy to mark D-Day and the Somme to commemorate the First World War, concerts in the UK, and singing for the annual Prom in the Park of the Dutch branch.

Through my work, I have met some exceptional people. For example, Corporal John Sleep, a Second World War paratrooper, who fought in Africa, Italy, and then landed on Sword Beach in Normandy and marched across France and Belgium to the Netherlands. He described the war as “utterly stupid.” I met him in Normandy and he invited me to sing for his tour group who take an annual pilgrimage to the Netherlands. The concert was for the release of a short film about John’s experience in the war: you can watch it here.

Another inspiring story comes from the Churchill family. Commando Patrick Churchill fought in the Second World War. His wife, Karin, is German. She lost her mother during the bombing in Dresden. After the war, she wrote to Mother Theresa to ask if she might work with her in Calcutta. Mother Theresa replied, suggesting she first improved her English. Karin moved to Oxford, where she met Patrick and fell in love. Their story is one of forgiveness and reconciliation: of love triumphing over war.

On a more personal note, 2017 has had one major setback. Last March I was hit by a car when cycling and I tore several ligaments in my shoulder, which then froze. I understand it will take two to three years before a surgeon can ascertain if it is necessary to operate. Whilst this does not hinder my singing directly, it makes traveling, carrying anything heavy, and most stage work quite tricky. I have therefore been focusing more on ceremonial concert work.

I’m very much looking forward to 2018: I have performances planned in Holland, France, Belgium, England, Wales, and Northern Ireland. Next week, I’m singing in Bach’s Weihnacht-Ortatorio, and the following week I’m recording a new composition by Roland Bouman: a setting of Vera Brittain’s “Perhaps.” Then we’re off traveling in Iceland – it would be wonderful to see the Northern Lights!

Thank you for reading, and a Happy New Year!