It’s been a wonderful year for Emma, singing in many different countries including Nepal, Hungary, and Vietnam for both charitable and commercial causes, recording under the record label Floating World Records, and gradually publishing her compositions with Edition HH. 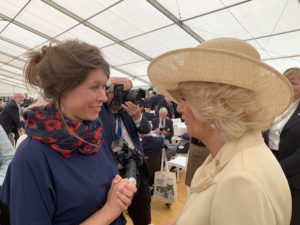 With HRH The Duchess of Cornwall at CWGC Bayeux Cemetery, 6th June, 2019.

Emma sang for veterans in the presence of HRH Prince Charles and Camilla, Duchess of Cornwall on 6th June in Bayeux, France, following the seventy-fifth anniversary of the D-Day landings. Later in the year, she sang in the presence of HRH Princess Margriet and her husband Prof. Pieter van Vollenhoven at the Air Borne commemorations in Arnhem, the Netherlands. It was lovely to see the respect shown to the veterans by both members of the public and by the royal guests. Emma was also honoured to be invited to sing for the US Mission to the EU’s Independence Day celebration in Brussels, Belgium, which various dignitaries including Jared Kushner attended.

Emma continues to sing for veterans and for remembrance ceremonies. She sang for Gurkha veterans and their families at the Gurkha Welfare Trust in Pokhara, Nepal. Back in Europe, Emma sang for D-Day and Operation Market Garden commemorations, as well as for the Spirit of Normandy Trust’s veterans reunion in Portsmouth and at their fundraising dinner on HMS Victory. She also sang in Venray, the Netherlands, for their celebration of seventy-five years of liberation, and at the First World War commemorations in Arras and the Somme.

On this theme, together with pianist Han-Louis Meijer, Emma released her first solo CD. “Echoes of War” presents music from and about the First and Second World Wars. It includes songs which were popular songs during both wars, such as those made famous by Vera Lynn, songs by classical composers such as Ravel, Poulenc, and Butterworth, love songs, patriotic songs, and retrospective songs. The CD is available at Floating World Records and various online stores and music-streaming systems. 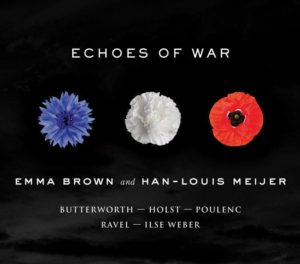 Emma’s next recording, also on Floating World Records, is with the progressive rock band “Simple Harmonic Motion.” “Fantasia” is due to be released in Febuary 2020. It includes sensitive and moving covers of classical music, including the Bach-Gounod “Ave Maria,” the Sanctus from Fauré’s Requiem, and various English folk melodies. Simple Harmonic Motion have a fascinating approach to performance: as well as using a mixture of live playing and synthesised backing tracks, they immense the audience in powerful light projections. For a taste of their work, please see the video below.

Another wonderful collaboration has been with Hungarian guitarist Robert Sinha. Robert and Emma worked together on a programme of music from the commemorations of the Dutch Admiral De Ruyter in the Nieuwe Kerk in Amsterdam last February. In September, they toured Budapest and Cegled, Hungary, with a programme of English music from Dowland to Sting. There are plans for further tours in 2020 and 2021. Below is a video of their work.

Emma also sang for a very wonderful children’s organisation, the Christina Noble Children’s Foundation, which has helped over a million children in Vietnam and Mongolia. The foundation was established thirty years ago by Christina Noble OBE, who was forced to live on the streets of Dublin as a teenager, and today helps children avoid the same horrendous circumstances. After singing a fundraising concert in Westport, Ireland, Emma was invited to sing at the foundation’s thirty-year anniversary gala in Ho Chi Minh city. Please do take some time to read about Christina’s life and work, for example in her autobiographies “Bridge Across My Sorrows” and “Mama Tina,” and consider donating to the foundation here.

Emma’s compositions are being published by Edition HH. Her motet “O Lux Beata Trinitas” was sung in Bath Abbey, Nottingham Cathedral, and St Thomas, Mellor, Stockport, all in the UK, as well as in the Netherlands. Meanwhile, in her home town of Leiden, the Netherlands, Emma was commissioned to write music for the carillon (city bells) for the city’s annual 3rd October liberation festival. Her composition “Leidse Gedenck Klokken” will be published by Edition Pors, a publisher specialising in music for carillons.

And on that note, here is a Christmas carol which was published last November and is available here.

Next year already has some interesting concerts, including singing in Ulaanbaatar for the Christina Noble Children’s Foundation, at remembrance ceremonies in France and the Netherlands, and at the Hay on Wye Second World War commemorations.

Thank you for reading, and thank you to all the musicians, organisers, and members of the public who have supported Emma over the last years. Merry Christmas, and a Happy New Year!