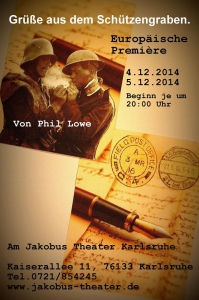 On 4th and 5th December, 2014, Emma Brown will star in the première of Philip Lowe’s new play “Grüße aus dem Schützengraben” (Greetings from the Trench). This one-act play in English and German explores the relationship between two soldiers who met at the Christmas Truce in 1914. Set in a television studio in 1962, the poet soldier Frank Philips and his daughter Madeleine discuss the correspondence and poetry of the two soldiers, and through this their story unfolds.