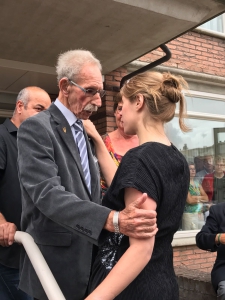 On Sunday, 25th September, Emma Brown sang in a surprise concert for the ninety-fifth birthday of Lieutenant-General Sir Ted Meines.

General Meines played a significant role in the Dutch resistance during the second world war, helping Jewish children escape the Nazi regime. In 2015, he was made an honorary citizen of Israel in acknowledgement of his work. He has worked with veteran organizations across the Netherlands and in organizing the memorials of the liberation of the Netherlands in 1945.