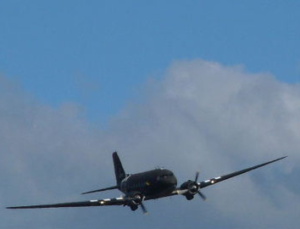 The story of Dakota FZ626 shows the fortitude and self-sacrifice of the servicemen of the Second World War.

On 19thSeptember, 1944, Dakota FZ626 flew to Drop zone ‘V’ near Arnhem, the Netherlands, to deliver supplies to British and Polish ground troops. She was part of a group of planes consisting of 101 Short Stirling Bombers and 63 Dakotas. 97 planes were shot, and 19 did not make it back home.

Dakota FZ626 was shot down as she approached the drop-zone. Instead of turning the aircraft away from the guns, Pilot Officer John (Len) Wilson flew directly towards them. The plane hit one of the fours gun and the explosion when she landed caused panic amongst the gun crews. Len Wilson, Herbert Osbourne, Reginald French, James Grace and Richard Newth were killed in the crash. Les Gaydon, Vince Dillworth and Wilfred Jenkinson cleared the burning aircraft in time by parachute. They were taken prisoner by the Germans.

For more information about incredible story of FZ626, please visit this informative website.

To commemorate the crew of Dakota FZ626, a private sponsor has commissioned a monument. It will be unveiled on Friday, 21stSeptember. Emma will sing “Abide with Me” and lead the national anthems during the ceremony.