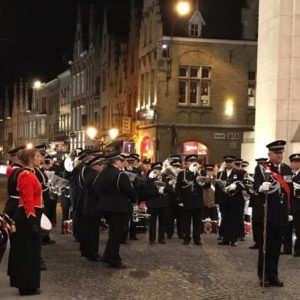 Singing during the Last Post Ceremony with the West Yorkshire Police Band on Remembrance Day in 2016.

On 24th March, Emma will appear as a guest soloist with the West Yorkshire Police Band and the Cheshire Constabulary Corps of Drums in Pontefract, England. The concert is to mark the centenary of the end of the First World War this year. Emma will sing popular songs and songs of remembrance.

Emma has sung with the West Yorkshire Police Band in Flanders in 2016 and 2017, at ceremonies in Tyne Cot CWGC cemetery, the Menin Gate, the New Zealand Memorial, and Messines Ridge. She is delighted to be joining them in England for the first in several events this year to mark the centenary of the armistice.

The concert is sponsored by the Hospice and Charities Darts and Domino League and hosted by the Rotary Club. All proceeds from the tickets will be donated to the Prince of Wales Hospice .