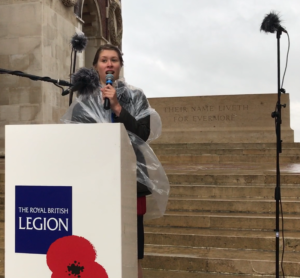 At the Thiepval Memorial

In the early hours of 1st July, 1916, mines exploded under German trenches and British, Commonwealth, and French soldiers charged. Many were gunned down the moment they emerged from their trenches. The offensive lasted four months and there were over a million casualties. It was calculated that there was one casualty every 4.4 seconds during the Battle of the Somme: therefore, during a 45-minute remembrance ceremony there would have been over six-hundred casualties.

The official British historian said of the conditions in the Somme: “Our vocabulary is not adapted to describe such an existence, because it is outside experience for which words are normally necessary.” (Source: Royal British Legion CD “Forever: The Official Album of the World War One Commemorations,” 2014) 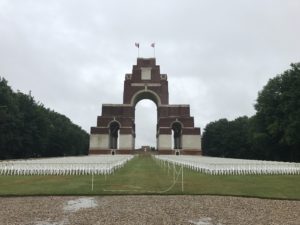 Thiepval Memorial is the biggest monument to missing British soldiers in the world. Completed in 1932, it stands almost fifty metres high: comparable to a cathedral. On the memorial are inscribed the names of the 72,244 missing British men and officers who perished in the Somme between July, 1915, and February, 1918. To one side of the memorial is an Anglo-French cemetery, the resting place of 300 French and 300 British Commonwealth soldiers, many of whose identities are known only to God.

The Royal British Legion’s service began with an address by the Right Honourable Lord Edward Llewellyn, OBE PC, Her Majesty’s Ambassador to France. The service was led by the Reverend Stephen Hancock CF and Deacon Jean-Pierre Cardon. The Band of Liberation played the hymns and national anthems. Before the service, Emma sang Eriskay Love Lilt and Blow the Wind Southerly. 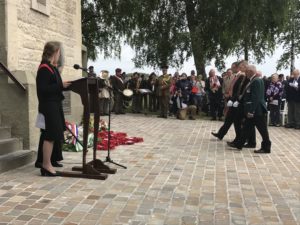 Wreath-laying at the Ulster Tower

The service at the Ulster Tower was led by Dame Patricia Hawkins-Windsor MBE. Wreaths were laid by soldiers and civilians from Northern Ireland, the Republic of Ireland, Great Britain, and France.

In 2014, when the road between the Thiepval Memorial and the Ulster Tower was widened, two bodies were recovered. One was an Fusilier from Inniskilling, Sergeant David Harkness Blakey, who was reported missing when he was twenty-six. He was identified from his metal identity tag. His name was removed the the list of the missing at Thiepval Memorial and the Somme Association arranged for him to be buried in the Connaught Cemetery. For more information, see here.