Skip to content
Previous Next
90th Anniversary of the Menin Gate 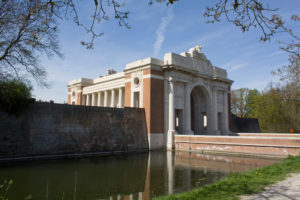 On 24th July, Emma will sing on behalf of the Commonwealth War Graves Commission to mark the ninetieth anniversary of the unveiling of the Menin Gate in Ypres, Belgium. She will be accompanied by the Royal Symphonic Band of the Belgian Air Force. The ceremony begins at 11:00 and is free and open to the public.

The Menin Gate is a large memorial honouring the missing from the Battles of Ypres between 1914 and 1917. On it are listed the names of over 54,000 Commonwealth soldiers whose bodies were never found or identified. Even though the Menin Gate is over thirty-six metres long and over twenty metres wide, there is not enough room to list all of the missing solders. Those who disappeared after 15th August, 1917, are listed at Tyne Cot Cemetery. New Zealand and Newfoundland soldiers are not listed on the Menin Gate: they have separate memorials.