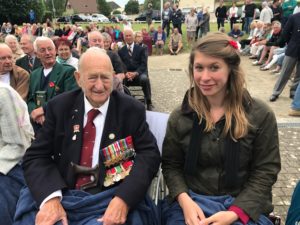 With parachutist John Sleep in 2017.

“You are about to embark upon the Great Crusade, toward which we have striven these many months. The eyes of the world are upon you. The hopes and prayers of liberty-loving people everywhere march with you. In company with our brave Allies and brothers-in-arms on other Fronts, you will bring about the destruction of the German war machine, the elimination of Nazi tyranny over the oppressed peoples of Europe, and security for ourselves in a free world.”

Emma will be traveling to Normandy in early June to sing for various D-Day commemorations and events.

Seventy-four years ago, “D-Day” commenced. Six gliders landed during the night of 5thJune, 1944. Their troops captured Pegasus Bridge and Horsa Bridge over the river Orne and the Caen canal between Bénouville and Ranville.

The next morning, the biggest amphibious operation in history began. Over four thousand vessels headed to the beaches of Normandy. Some stayed at sea to protect the troops from a naval attack, others brought troops to the beaches. Thanks to the glider troops, it was possible to cross the Orne and the Caen canal and advance in land. 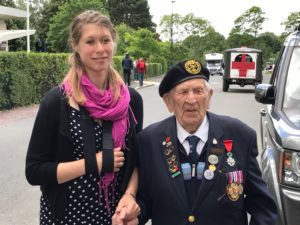 Operation Overlord involved some of the toughest fighting on the Western Front. On 6thJune, 1944, Winston Churchill said in the House of Commons

“The battle that has now begun will grow constantly in scale and in intensity for many weeks to come, and I shall not attempt to speculate upon its course.”

The battle in Normandy would ultimately lead to the Allied Forces’ victory on the Western Front. It would also claim the lives of over half a million troops and civilians: some estimates are much higher.

Every year, veterans and their carers and descendants visit Normandy to commemorate victims of war. Ceremonies range from small, local events in villages and hamlets to huge ceremonies and parades.

Emma’s schedule this year commemorates different aspects of the Battle of Normandy.

She will sing at a ceremony in Ranville at the Six Glider Stones, one for each of the gliders which landed during the night of 5thJune. She will also sing during the Midnight Ceremony at Pegasus Bridge arranged by the daughter of Major John Howard, the man in charge of the glider landings.

On 6thJune, there will be a special ceremony for the unveiling of a monument for the crew of LCH185, a landing craft which was torpedoed off the coast of Lion sur Mer. Only four of the forty men believed to have drowned have graves.Ninety-four year old Patrick Thomas, almost certainly the only survivor from LCH185, will attend. For more information, please see this short video.

Emma will sing for a ceremony for Paratrooper Ron Tucker, who passed away last April. Ron was a founding member of the Parachute Regiment’s Airbourne Division. He was the last survivor from his regiment, and the last D-Day veteran from Teeside. His story can be read here. Ron asked for his ashes to be scattered in Normandy. A tree has been planted in his honour. In his own words, Ron was the “Last of the rear party – joining the main battalion, at last with my brothers.” 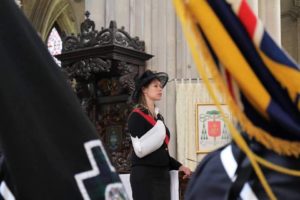 There are many ceremonies for the casualties of the sea landings and the fighting that followed. Emma will sing at, amongst others, Vierville sur Mer, Ranville, Gonneville en Auge, Bréville, Grangues, and The Royal British Legion’s ceremonies in Bayeux Cathedral and CWGC Bayeux Cemetery. She will give a concert at Bénouville Castle with the Band of Liberation and the well-known Dutch cabaret singer Lily Kok.

This year, Emma has been invited to pay tribute to the US troops in D-Day. She will sing for the Liberty Group March in Carentan in which serving troops and veterans march to the town square. She will sing at a special ceremony honouring the Native American soldiers buried at the US cemetery in Colleville sur Mer. Veteran Charles Norman Shay of the Penobscot tribe will attend and flowers will be laid on the twenty-nine graves of Native American military personnel who perished during the fighting. For more information about Charles Shay, please follow this link.

Emma will also visit the German Battery at Longues sur Mer with a party of British veterans to acknowledge the German casualties.

It will be an intense and moving week.

“I vow to thee my country” at The Royal British Legion’s ceremony in Bayeux Cathedral in 2017.