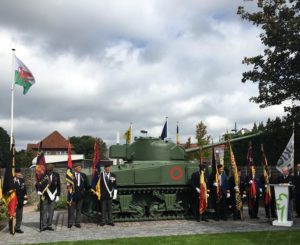 Emma will join soldiers, officers, and veterans of the Welsh Guards in Hechtel, Belgium, to sing during remembrance ceremonies during their pilgrimage.

The Welsh Guards fought at Hechtel during the Second World War. In 1944, they helped capture ‘Joe’s Bridge,’ a wooden bridge over the Bocholt-Herentals Canal, which became a strategic point in Operation Market-Garden.

During their pilgrimage, the group will visit sites linked to the Welsh Guards during the First- and Second World Wars.

Emma will sing during a remembrance ceremony at the Sherman Tank monument on Sunday, 9thSeptember.