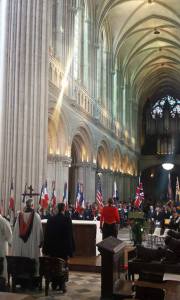 Emma has had a busy month singing internationally for veterans. She sang in Normandy at the D-Day memorials ceremonies on 5th and 6th June, and she participated in tattoos organised for the Dutch Veterans’ Day on 27th June.

Emma’s visit to Normandy was moving and inspiring. She sang at several ceremonies at which World War Two veterans were present. These included the services in Colleville-Montgomery and Ranville, organised by Normandy Veterans, and at the Royal British Legion memorial services in Bayeux Cathedral and at Bayeux War Cemetery. Afterwards, she had the honour of meeting the veterans.

Dutch Veterans’ Day occurs on the last Saturday of June each year. This year, Emma joined the Band of Liberation at the mayor’s ceremony in Zoetermeer in a programme of marches and songs. She later sang at the tattoo in Ter Aar.

Emma is currently preparing for a concert with the Band of Liberation in Katwijk and for singing in the Leiden Cultural Festival (“Cultuur071”).