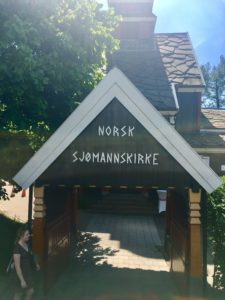 The Norwegian Seafarers’ Church in Rotterdam, the Netherlands. 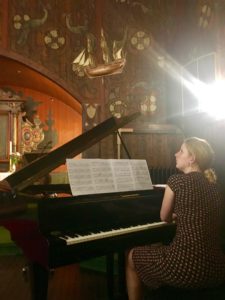 On 17th May, mezzo-soprano Emma Brown and pianist Isolde Troost gave a recital at the Norwegian Seafarers’ Church in Rotterdam (Sjømannskirken) as part of the celebrations of Norway’s National Day. Emma and Isolde presented their programme of Grieg and Liszt. Since Isolde took her Master’s in Oslo, she was able to introduce the programme in Norwegian to the mostly Bokmål-speaking public.

“Syttende Mai” (17th May) is the anniversary of the signing of the 1814 Norwegian Constitution which granted Norway independence from Denmark after a four-hundred year union. Norway did not gain her full independence until 1905. Syttende Mai has also become associated with remembrance, since Norway was liberated on 8th May 1945. Therefore, as well as the children’s parades, flag-flying, and music, there are also remembrance ceremonies and in Oslo a salute is fired.

Emma and Isolde were honoured to participate in the Syttende Mai celebrations in the Netherlands and meet the warm Norwegian and international community at the seafarers church.