Skip to content
Previous Next
Remembrance in Kleve, Germany 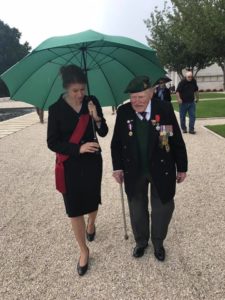 The Stichting Nederland-Amerika (Dutch-America Association) organises annual visits to the Netherlands for Second World War veterans from the US, Canada, and the UK. This year, the veterans will visit Reichswald Forest War Cemetery, the largest CWGC cemetery in Germany. Around 7,500 commonwealth servicemen are buried in the cemetery, as well as some Polish servicemen.

Those buried in Reichswald Forest War Cemetery fought in various campaigns. Many of the soldiers of the land forces died in the advance through Reichswald Forest in February, 1945. The airbourne forces landed in nearby Hamminkeln and crossed the Rhine. There are also bodies of airmen recovered from air attacks over Germany.