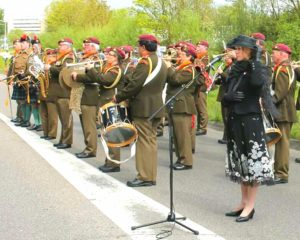 Emma and the orchestra during the Dutch Remembrance Ceremony in Leiden.

In the Netherlands, ceremonies of remembrance are held on 4th May: the anniversary of the day before the Netherlands was liberated from the Second World War Nazi occupation. Ceremonies take place throughout the country and wreaths are laid at monuments. The Dutch have a “taptoe signal,” used in the same way as the British and Commonwealth’s “Last Post,” which is played before silence is observed during remembrance ceremonies. Two minutes silence is observed across the country at eight o’clock in the evening.

This year, Emma sang for the Remembrance Ceremony in Leiden. The Mayors of Leiden, Oegstgeest, and Oxford, Leiden’s twin city in the United Kingdom, attended the ceremony and laid wreaths. Retired General Arie van der Vlis gave a thought-provoking speech about Dutch military engagements since the Second World War. Also present was an elderly veteran who fought at the bridge and the airfield near the monument. Fifty-one Dutch soliders perished there in 1940.