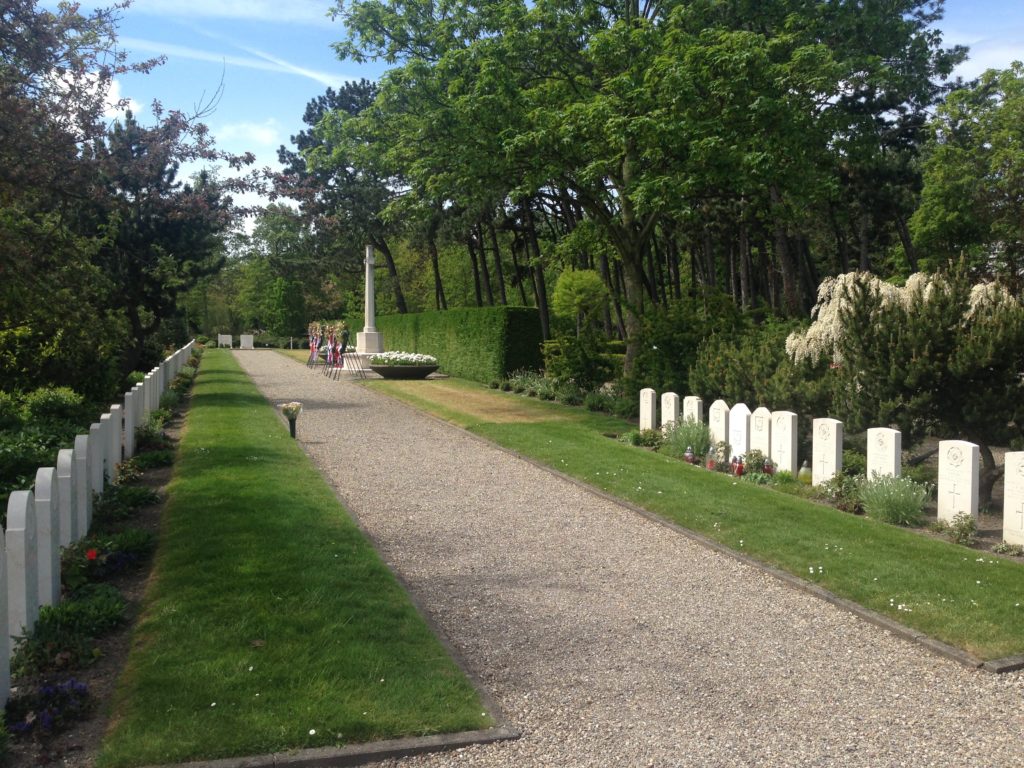 The CWGC British war graves at Hook of Holland, the Netherlands.

On 13th May, 1940, a group of British Guardsmen were sent to assist the Dutch following the German occupation of the Netherlands. 651 troops, known as the Harpoon Force, were sent to Hook of Holland. That morning, as Lieutenant-Colonel Joseph Haydon (Irish Guards) and his adjutant Captain Henry Phillpots walked along the quay at Hook of Holland, they suddenly they saw a cortege of cars, led by motor cycles, arriving. The cars stopped. From each one a man stepped out. Fearing they were German, Captain Phillpots reached for his hand gun.   One of the men approached the two officers and announced: “Her Majesty the Queen of the Netherlands has arrived.” To their surprise, and one imagines their relief, it was indeed Her Majesty Queen Wilhelmina of the Netherlands. HM was hoping travel by sea to Breskens, Zeeland, near the Belgium border, to continue governing the country. Arrangements were made with the commanders of HMS Hereward to carry HM there. It seems clear that neither officer had expected to co-ordinate such an important mission.

Later that day, Guardsmen helped members of the Dutch government and captains of industry (including the Philips family) escape. Unfortunately, the Germans had become aware of the activities in Hook of Holland and they carried out an air raid. Seven Guardsmen lost their lives in this raid, and twenty-three were wounded. One of the casualties was Captain Phillpots. He hid his wounds, aware that the medics had more severe casualties to which to attend. Captain Phillpots was awarded the Military Cross for his unselfish behaviour.

In the end, Queen Wilhelmina did not go to Breskens. Word reached the ship that the Germans were planning to bomb Zeeland, so HM was taken to England. She remained in exile until 2nd May, 1945, a period of almost five years.

This year, an organisation was established in the Netherlands to commemorate the guardsmen. Together with the Rotterdam City Council and the 4th May Committee of Hook of Holland, the Guards Remembrance Association of the Netherlands has organised a remembrance ceremony at CWGC Hook of Holland, where some of the guardsmen are buried. Representatives from the Welsh- and Irish Guards will be present, travelingas the Welsh Guards Pilgrims. Emma will sing with the band of the Dutch Grenadier Guards “Regimentsfanfare ‘Garde Grenadiers en Jagers’.”