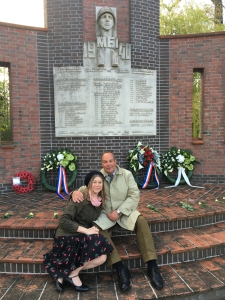 Remembrance Day in the Netherlands occurs on 4th May, with two minutes silence held at 20:00. On 5th May, 1945, the Netherlands was liberated from Nazi occupation and as such 5th May is “Liberation Day.” Ceremonies are held on both days throughout the country. This year, Emma sang at the open air ceremony in Leiden at the monument at the Haagsche Schouw. This was built to honour and remember the fifty-one soldiers who died fighting at the bridge to try to prevent the German soldiers from entering the city.

It was a moving ceremony. In attendance were the Mayors of Leiden, Henri Lenferink, and of Oxford, Rae Humberstone, and representatives of the Dutch armed forces and the Royal British Legion. The Band of Liberation accompanied Emma under conductor Simon Dubbelaar.