Skip to content
Previous Next
The Armed Man: A Mass for Peace 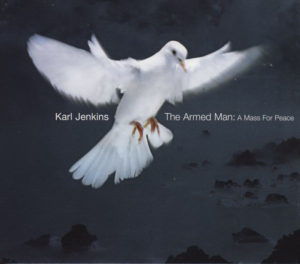 Karl Jenkins’ “The Armed Man: A Mass for Peace” was commissioned by the Royal Armouries Museum and first performed in 2000. Based around the movements of the Mass, it journeys from militarism and a descent into war, through the horrors of war, and ends with a prayer for peace. The additional texts include the Islamic Call to Prayer, sections of the Bible and the Mahabharata, and citations from Rudyard Kipling, Alfred Lord Tennyson, and Hiroshima survivor Sankichi Toge. Emma’s solo “Now the Guns have Stopped” was written by Guy Wilson, master of the museum, and concerns the guilt experienced by surviving soldiers of World War One.

The French secular song, “L’Homme Armé” (the armed man) was cited in several Masses from the mid-fifteenth century until the eighteenth century. Karl Jenkins quotes the song in the opening and closing movements of his work. Other composers who used this theme include Dufay, Ockegem, Obrecht, Morales, Palestrina, Carissimi, and, more recently, Peter Maxwell Davies.

On a personal note, Emma recently visited Corporal John Sleep, a paratrooper from the Second World War, who fought during the D-Day landings on Sword Beach and in the Netherlands. He mentioned how his main goal was not so much defeating the enemy but ending the war. In other words, he was fighting for peace. With this in mind, the subtitle “A Mass for Peace” perhaps reflects the goals of many serving soldiers.

The Mass is dedicated to the victims of the Kosovo crisis. This is close to Emma’s heart since her partner worked in the peace operation after the war.

The concert is on Sunday, 5th November at 15:00 in the Muziekgebouw aan ‘t IJ in Amsterdam, the Netherlands. The first half of the programme is the première of a work commissioned by the Hoofdstadkoor of Amsterdam to mark their sixty-fifth anniversary. The Iraqi composers Hamid Al Badri and Raad Khalaf, father and son, have written a powerful work based on songs of love and peace called “The Golden Bird.” It has lush symphonic textures and uses authentic Iraqi and Syrian instruments. The solos are sung by Baidar Al Basri, the daughter and sister of the composers.

In the second half of the concert, Emma will join the Hoofdstadkoor of Amsterdam as a soloist together with Taiwanese soprano Kayi Min and Turkish baritone Bora Balci, with the Promenade Orkest and conductor Martin van der Brugge for “The Armed Man.” Tickets are available here.