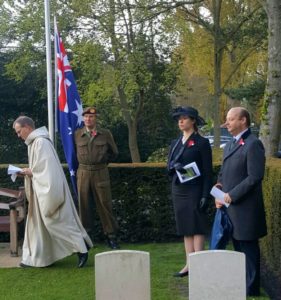 Emma Brown was honoured to sing during the ANZAC Day memorial service at Ockenburg Commonwealth War Cemetery in The Hague, the Netherlands. Eighty-seven soldiers, sailors, and airmen who died during the Second World War are buried there: their nationalities include Australian, British, New Zealand, and Canadian.

The ANZAC memorial ceremony includes familiar texts from British Remembrance ceremonies, such as “They shall grow not old,” and in addition a text from Ataturk: “You, the mothers who sent their sons from faraway countries, wipe away your tears; your sons are now lying in our bosom and are in peace. After having lost their lives on this land they have become our sons as well.” It was humbling to hear the Turkish Ambassador speak these words.

Her Excellency Ms Janet Lowe, Ambassador of New Zealand, gave a short address. She stated: “War is a bloody and terrible thing, and the young soldiers found strength in all sorts of ways and in all sorts of places. In unfashionable but eternal concepts such as loyalty to King and country. In God. In the bottle. In the youthful self-belief that ‘death on the battlefield will never happen to me’.” She continued by expressing gratitude for our current peaceful situation in the Netherlands, and the need to maintain the ANZAC spirit of “courage, endurance, ingenuity, the willingness to make sacrifices – including the ultimate sacrifice – for the greater good, and last but not least, loyalty to one’s mates.”

It was a humbling ceremony, especially realising how far away from home many of those buried in Ockenburg were laid to rest. Emma led the hymns and National Anthems, and sang “Abide with Me.”